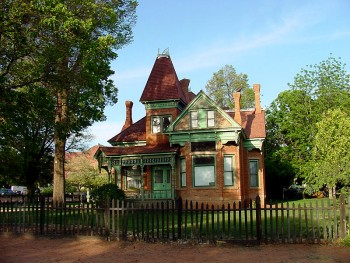 Kanab, Utah, is a city celebrated for its breathtaking scenery, temperate climate, and sturdy settlers. A sort of oasis in the surrounding desert environment, Kanab's wide, tree-lined streets and substantial architecture create a favorable atmosphere. The word "Kanab" comes from a Native American word for a willow basket used to carry an infant on its mother's back. The first attempt by Anglo-Americans to establish a permanent settlement was made on 7 June 1858. The story of Kanab's first two decades is one of a series of unsuccessful efforts at colonization, each discouraged by attacks from hostile Native American tribes who were clearly opposed to white settlement of the area. Originally, the area was considered suitable for cattle raising. But equally important was the extension of Mormon dominion into northern Arizona.

Evidence of the Anasazi's footsteps across the high plateaus of the area date back 2000 years. They were cliff dwellers who hunted deer and mountain sheep, and farmed the land. The Anasazi reached the peak of their culture from about 700 A.D. to 1000 A. D. In 1300 A. D., they abandoned their homes and moved south. The cause of their departure is unclear. But it is believed that a severe drought or invasion by the Navajos precipitated their move out of the area.

After the Anasazi disappeared, the area was criss-crossed by nomadic tribes of Paiute and Navajo Indians. The Kaibab band of Paiutes & the Navajo continue to live here and contribute to our cultural heritage.

In 1776, the first Europeans led by Father Escalante and Father Dominguez explored this area seeking a route from Santa Fe, New Mexico to California. At that time the region was Spanish territory that later passed to Mexico. As a result of the war with Mexico in 1846, the territory became part of the United States in the 1846 Treaty of Guadalupe Hidalgo. The Old Spanish trails of that time later became the foundation for the highways of today. 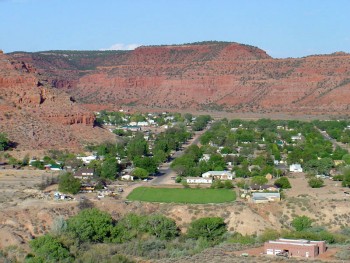 Mormon pioneers settled in the Salt Lake Valley, Utah in 1547. Within a few years man new settlements were established as the region was explored. Jacob Hamblin, a frontiersman and Indian missionary, was instrumental in the settlement of the Kanab area. Under the direction of Hamblin, construction of Fort Kanab was started in 1864 to provide a base for exploration & protection from Indian attacks. Frequent India attacks made it impractical to maintain the fort and it was abandoned in 1566. Fort Kanab was then periodically occupied until June 14, 1570, when the party of settlers under the leadership of Levi Stewart arrived to establish a permanent settlement.

Levi Stewart was called by President Brigham Young to lead a group of pioneers to settle this area. On June 14, 1870, he brought a party with seven wagons from Pipe Spring, where they had camped temporarily, to Fort Kanab. The fort had been built a year before by Jacob Hamblin and Indian missionaries.

A Kanab ward was organized September 11, 1870 with Elder Stewart as Bishop. Other settlers arrived, homes were built and plans made for a permanent community. A fire in the Fort on December 14, took the lives of Mrs. Margery Wilkerson Stewart and her five sons. 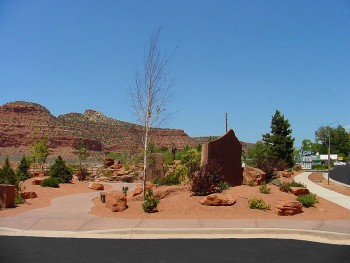 The great Mormon frontiersman and Indian missionary settled in Tooele Valley, Utah in 1850. He began peaceful negotiations with the Indians, and was so successful that the officials of the Church of Jesus Christ of Latter-day Saints sent him to establish residence among the Indians at Santa Clara, Utah in 1854.

A Fort was erected on this site in 1865 into which he moved in 1869. He assisted Major J.W. Powell and party 1869-72. He was transferred in 1878 to Arizona and later to New Mexico. He is buried in Alpine, Arizona. His friendship with the Indians saved many lives.