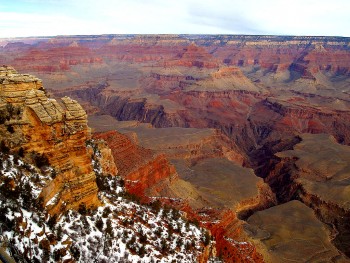 Being only 1 mile deep the Grand Canyon is not the deepest canyon in the world; there are deeper canyons found in Idaho and Mexico. It is however, the largest canyon and it offers geologists access to an historical record found nowhere else in the world. Geologists have discovered that parts of the Grand Canyon are more than 2,000 million years old, with the Vishnu Schist and Zoroaster Granite rock layers being the oldest. They are found at the bottom of, and beneath the canyon floor. Some geologists believe that these rock types could have come from a mountain range that once stood as high as the Rocky Mountains that eroded to a flat plain over time. If this is true it means that the mountain range has virtually inverted itself during the past 2,000 million years.

It was approximately 750 million years after the creation of the Vishnu Schist and Zoroaster Granite rock layers that the next layer of rock was formed. There are 10 different layers of rock found on the canyon wall. Each layer adds another color to the rainbow of the canyon. Each tells a story about the history of the earth.

There are two areas in the geologic history of the Grand Canyon that geologists call "unconformity" or non-layer in the rock. One, called the Pre-Cambrian Unconformity, represents the time it took for the mountain range to erode into a plain. The other is called the Great Unconformity, and represents a time in the geological history of the canyon that left no sediment behind. Geologists theorize that during this time an advancing sea eroded all of the sediment that should be found there. 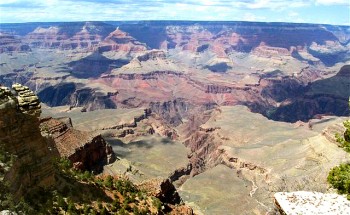 Eager geologists will have a new layer to study as the wind, weather and river continue to cut though the floor of the Grand Canyon. Unfortunately for them, they will have to wait a few million years to begin.