As part of his 1858 U. S. Army survey report, Lieutenant Joseph Ives stated that the Grand Canyon area “is of course altogether valueless …. Ours has been the first, and will doubtless be the last, party of whites to visit this profitless locality." Fortunately, not everyone’s view of this ‘Natural Wonder of the World’ has been as dismal as Lieutenant Ives.

It is believed that the earliest inhabitants to the area discovered the Grand Canyon approximately 4,000 years ago. This group was mainly hunter/gatherers and traveled though the canyon on a seasonal basis. They left behind small twig creations and pictographs made of bright red and white colors. It is presumed that rather than leaving the region due to environment change, these people integrated with the Pueblo people that settled in the Grand Canyon area some years later. The Pueblo tribes built communities in the area and began to farm and keep livestock. This group left behind the small stone dwellings that dot much of the south western region of the United States.

Futile searches for the mythical Seven Cities of Cíbola lead to the Spanish being the first Europeans to see the Grand Canyon in the mid-1500s. However, they did not begin to colonize the region until the late-1700s. During the gap between the Spanish explorers discovery and settlement of the area several prospectors and fur tradeds stumbled upon the canyon. Most saw it as an obstacle “to deprive all human beings of the ability to descend and make use of its waters.”

The U.S. Army completed its survey of the Grand Canyon area by 1860. The famed one-armed explorer John Wesley Powell made his first trip through the canyon via the Colorado River in 1869. He made a second excursion down the river in 1871. He and his party are believed to be the first to undertake this hair-raising adventure.

Although many of the settlers came to the canyon in search of riches from the earth such as zinc, copper and asbestos, they soon discovered that tourism was a more profitable venture. By 1880, tourists were coming to the canyon by stagecoach. They where staying in tent camps similar to mining camps or traveling the long distance between the canyon and the nearest town each day. In 1901, the Sante Fe Railway completed a 60-mile spur line between the town of Williams, Arizona and what would become the Grand Canyon National Park.

There where several attempts to set the Grand Canyon aside as a National Park between 1882 and 1886. It wasn’t until 1893, that the federal government named the area a National Game Reserve. At that time the canyon bore the name given to it by the Piute Indians; Kaibab, which means Mountain Lying Down. 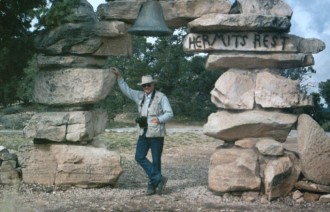 After visiting the reserve in 1903, President Theodore Roosevelt began his own campaign to preserve the canyon and surrounding area. In 1908, Roosevelt declared the reserve to be a National Monument after his own unsuccessful attempts to get the land set aside as a National Park. He named this new monument the Grand Canyon, as the area had been dubbed by John Wesley Powell years earlier.

In 1917, the Senate approved a bill declaring the Grand Canyon be upgraded to a National Park. President Woodrow Wilson signed the bill into law on February 26, 1919 making it the 17th National Park in the United States. Since that time the Grand Canyon National Park has continued to grow. In 1927, the Kaibab forest land and the North Rim were added to the park; additional land was added in 1932 and 1969. In 1975, President Gerald Ford signed a bill that doubled the size of the park by incorporating Marble Canyon and Kaibab National Forest. The Grand Canyon National Park is currently more than 1,218,000 acres and reaches from Lee’s Ferry on the Utah/Arizona boarder to the Grand Wash Basin located in northwestern Arizona.

During the Grand Canyon’s first year as a National Park it received 44,173 visitors. Today the park sees more than 5-million visitors each year, but fewer than 10% of them will make the trip to the North Rim.

While the view of the Grand Canyon is not as expansive from the North Rim, it is just as breathtaking. The North Rim is at a higher elevation making the temperatures a minimum of 10 degrees cooler than the South Rim. Several people choose to make the 25-mile hike from rim to rim. The hike takes 3 to 4-days and does require a permit from the National Park Service. The drive from rim to rim is more than 220-miles long and takes approximately 5 ½ hours to complete.

Both the South Rim and North Rim have several day-hikes to choose from as well as many Ranger Guided tours and programs. Both Rim areas offer mule-trips and guided tours to the bottom of the canyon. The South Rim is open 365-days per-year, while the North Rim is closed each winter due to bad weather. The winter season closure begins sometime in mid-October each year.