Museums In Las Vegas | Museums For Kids In Vegas

This small, yet powerful, exhibit captures the triumphant spirit of New York City, the country, and the entire world following the horrific terrorist attacks of September 11, 2001 in the United States - especially on the World Trade Center in Manhattan. Perhaps more importantly it remembers those who died during the attack on and subsequent collapse of the towers. This exhibit presents a rotating collection of t-shirts and memorabilia from first responder departments from all over the world left outside the casino during the months following the attacks.

The nuclear threat was one of the most influential forces during the last century. As atomic bombs were developed they were tested in the Nevada desert, and this had (and still has) a great affect upon the region. Atomic testing included controversy, history, and pop culture. The Atomic Testing Museum aims to cover all of these topics, but unfortunately omits covering the victims of the radiation during the testing. However, in Las Vegas style, this museum has a ride. Museum patrons can experience a simulated above ground nuclear test - shaking seats, air gushes, but no nuclear radiation. By the way, Miss Atomic Bomb 1957 is a bomb shell! 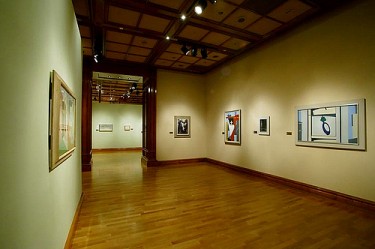 Hours: 9 am to 10 pm daily
Admission: $15 for adults and $12 for Nevada residents, seniors, and studentsThe Bellagio Gallery of Fine Art is located across from the pool entrance in the convention corridor in the resort. Exhibits in the gallery are exclusively created for the gallery and are presented for about a year. For instance, the collection The Impressionist Landscape from Corot to van Gogh is on display from June 10, 2005 to April 2006 and includes some of the finest pieces of nineteenth century impressionism. This art movement is important since the prominent artists of the time broke with convention and left their studios to paint landscapes out in the open. Some past exhibits are Andy Warhol: The Celebrity Portraits (February 7, 2003 - September 1, 2003) and Alexander Calder: The Art of Invention (January 25, 2002 - July 24, 2002).

The Clark County Heritage Museum is a fun site to learn more about local Las Vegas history. It showcases several homes and structures that were restored to reflect various decades in the twentieth century. Curators have taken great strides to ensure that the interiors, funiture, and other accessories accurately portray the specific decade of the house. There is also a section of the museum that has a mock ghost town. Several ghost towns exist throughout Southern Nevada. There is also an exhibit hall that presents Southern Nevada history from prehistoric to modern times. 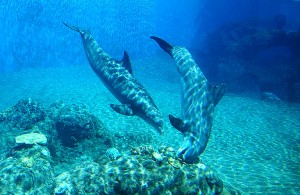 Hours: 11 am to 5:30 pm (7 pm during the summer) weekdays and 10 am to 5:30 pm weekends and holidays
Admission: $12 for adults (includes admission to Siegfried & Roy's Secret Garden), $6 on Wednesdays and after the Secret Garden closes, and free for children under 10

Dolphins swim around in a 2.5 million gallon tank for all to enjoy. Mirage management claim that there are no shows or tricks, but Dophin Habitat staff give the dolphins treats when they do flips, swim in formation, or perform other actions that visitors like to watch them do. There is a tunnel on the side of the aquarium in which people can get a better underwater view of the dolphins.

The Howard W. Cannon Aviation Museum is a 24 hour museum for a 24 hour city. Since it is in McCarran International Airport it focuses on the aviation history of Southern Nevada. Aviation industry has played a crucial role in the development and evolution of the area as it has enabled people from all over the world to quickly and cheaply travel to Las Vegas. Without the proliferation of commercial aviation during the second half of the twentieth century, it is hard to imagine how Southern Nevada would have turned out. Exhibits are spread throughout airport; locations include: above baggage claim, A & B terminal gates, Terminal 2, North Las Vegas Air Terminal, and the general and corporate aviation terminal.

Ethel Mar's operation began very modestly, but later her business would make some of the world's most popular sweets - M&Ms, Milky Way, 3 Musketeers, Snickers, and Mars bars. There is a tour that lasts about 10 minutes that explains how chocolate candy bars are made. Unless you're a choc-o-holic, perhaps the cactus garden will be the highlight of your visit at this place. There are about 350 species of exotic and rare cacti with signs for self-guided tours. Spring is a good time to visit since the cacti are in bloom.

As a fine arts museum of growing international stature, the Las Vegas Art Museum aims to bring exhibitions of prominent works to Southern Nevada while showcasing the work of up-and-coming artists. It spacious exhibition rooms allow it to house great collections and exhibits of fine art. Docent led tours begin at 2 pm on the weekends.

Hours: 10 am to 5 pm Monday through Saturday, Noon to 4 pm Sundays, and closed on Thanksgiving, Christmas, and New Year's Day
Admission: $12.50 for adults and $8.50 for seniors and students

Devoted to the man who made Elvis look like a conservatively dressed church boy, the Liberace Museum celebrates "Mr. Showmanship" himself. The opulence required to do justice to this colorful man and master of the piano rivals the flashing neon lavishness of The Strip. The museum displays the ostentatious pianos, cars, outfits, and jewelry that are probably worth more than the annual gross national product of several small and poor countries. Highlights of the museum include a Baldwin grand piano and Duesenberg Roadster - both encrusted with rhinestones. The museum also houses the Liberace Foundation which has supported talented students pursue excellence in the performing and creative arts by providing scholarships for more than 26 years. There is also a gift store and café.

Hours: 10 am to 5 pm Tuesday through Sunday
Admission: $7 for adults, $6 for seniors (55+), military personnel, and children (1-17), and free for museum members and children younger than 1 year old

Despite Sin City's reputation, there is at least one place where kids can play and have fun in a kid friendly environment. The museum includes several activity based exhibits that will captivate children. Some of the exhibits are a mock grocery store and a bean bag film festival (not always offered) that screen major studio and independent films targeted towards the entire family. Since this museum is in Las Vegas, there is an exhibit of old neon signs with an explanation of how they work. 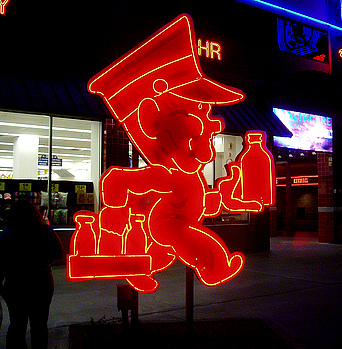 This is a unique museum that pays homage to a special part of Las Vegas' heritage - neon. It is not a traditional museum where patrons stroll through exhibits; for tours of the vintage neon signs from Las Vegas' past require an appointment set up in advance. These guided tours are through junkyards - nicknamed "The Boneyard" - full of the signs. This is an interesting way to feel the nostalgia of Sin City.

Shark Reef is one of the Mandalay Bay Resort & Casino's many attractions. It features more than 250,000 aquatic animals - most of which are found in a 1.6 million gallon tank. This tank is the third largest in North America. Visitors can feel in horseshoe crabs and bamboo sharks in a petting aquarium area. Another highlight are the two underwater tunnels that allow visitors to see the animals in the tanks from many different angles.