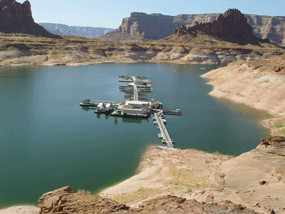 Dangling Rope Marina, 40 miles (64km) uplake from Glen Canyon Dam, replaces the marina that was formerly in Forbidden Canyon near Rainbow Bridge National Monument. This marina is accessible only by water.

Was There Really a Dangling Rope?

According to the late author and Glen Canyon historian C. Gregory Crampton, the answer to that question is "yes." The canyon was named Dangling Rope Canyon in the pre-dam days when some river runners found a rope dangling down from a 40-foot (12m) cliff wall. At the same location were some pecked steps, possibly of prehistoric origin. It appeared, however, that the steps had been enlarged at some time, probably by uranium prospectors in the region in the 1940's and 50's.

At Dangling Rope, the National Park Service provides a ranger station, restrooms, free boat pump-out station, and emergency communications. During the summer season, interpretive rangers are stationed at nearby Rainbow Bridge National Monument. Rangers from Glen Canyon National Recreation Area patrol Rainbow Bridge National Monument and provide visitor information, even though the monument is a separate unit of the National Park Service and is subject to more stringent regulations regarding visitor use & activities than is Glen Canyon NRA.