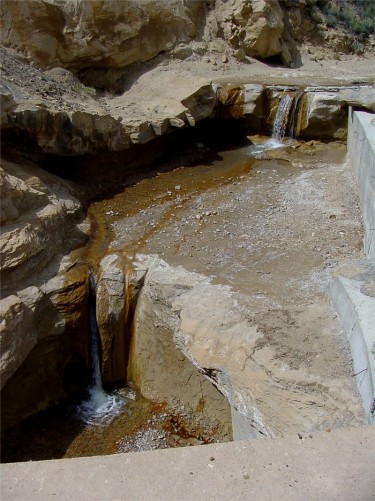 Trail: The route follows along the shore of the Escalante River. There is a sandy trail most of the way, but often it is easier to walk in the gravel filled streambed; the water is seldom more than ankle deep. Be sure to wear wettable shoes.

Season: Spring, summer, fall, winter. The best seasons for this hike are spring and fall. Escalante Canyon is very hot in the summertime, but you can always count on the availability of water. For current conditions call the Escalante Interagency Visitor Center at (801) 826-5499.

Vicinity: Near the town of Escalante

Among Utah’s serious hikers, the 85-mile-long Escalante River is well known. The small desert river and its dozens of side canyons contain some of the wildest, most scenic desert wilderness in the United States. It is a region of redrock canyons, sandstone arches, and Anasazi Indian ruins. The Escalante badlands contain hidden natural treasures guaranteed to give pause to even the most unenthusiastic of hikers. Sadly, none of the BLM managed Escalante drainage has yet been give the protection of a designated wilderness area, but in 1996 it was included in President Clinton's new Grand Staircase-Escalante National Monument.

Although the Escalante drains over 200 square miles of the Colorado Plateau, it is so remote that its existence wasn’t even known until the middle of the last century. In 1866 it became the last major river to be discovered in the American West. It was named six years later in honor of the early Spanish explorer Silvestre Valez de Escalante who visited Utah in 1776.

There are a number of hikes in the area that touch upon parts of the Escalante River, but the 14-mile section of the river described here is the most accessible. It is also a particularly interesting section, with fine examples of the sorts of things that make the Escalante drainage so interesting: petroglyphs, Anasazi ruins, natural arches, and slickrock pools.

From the trailhead near Escalante Town the trail winds down a small sandy hill for about 0.2 mile before intersecting the Escalante River. The trail reaches the river very close to its source, and at this point the Escalante is little more than a muddy wash, lined with unsightly tamarisk trees and old tires that have washed down from the city dump. But don’t despair. Within a mile the canyon becomes more pristine.

Soon after the river enters Escalante Canyon, near the junction with Pine Creek, you will pass a gauging station used for measuring the water flow. From that point the trail often splits, giving you a choice of either side of the river to walk on. Just pick the easiest side, and don’t bother trying to keep your feet dry. It is futile.

The scenery gets better and better the farther downstream you walk. There are many good camp sites along the way, but if you plan to spend only one night in the canyon you should try to camp near the junction of Death Hollow. This side canyon is exceptionally pretty and, if time permits, you should try to spend at least a few hours exploring it before continuing down the Escalante.

Death Hollow is a 23-mile-long drainage that begins near the Hells Backbone Road between Escalante Town and Boulder. The dry upper reaches of the Hollow lie within the boundaries of Dixie National Forest and are part of the Box-Death Hollow Wilderness Area. The oasis-like Lower part of Death Hollow, however, lies within the jurisdiction of the Bureau of Land Management, and is not part of the designated wilderness area. Hopefully this situation will change in the future, but for now the most exquisite part of Death Hollow, along with the rest of the Escalante Basin, remains relatively unprotected.

Lower Death Hollow is best explored without a backpack. For the first mile the fast flowing stream rushes down the scenic canyon between patches of wild flowers and, unfortunately, poison ivy. It is best to wear long pants when walking through the foliage, or wade in the center of the streambed. After about a mile and a half the canyon begins to narrow noticeably, and you will encounter a series of pools and water slides. The best pools for swimming are about two miles upstream. The setting is idyllic: crystal-clear slickrock swimming holes, surrounded by red sandstone cliffs decorated with green foliage and yellow wildflowers. You might want to extend your hike by a day just to enjoy the attributes of the ill-named canyon.

From the mouth of Death Hollow, the Escalante River flows eastward for another 4.0 miles before coming to the junction of Sand Creek, another possible side trip though not quite of the same caliber as Death Hollow. Beyond that, another 0.4 miles will bring you to the first of two natural arches along this stretch of the Escalante. It is situated high on the top of the canyon wall, on the right side of the canyon. Impressive as this arch is, however, an even more thrilling sight is an Anasazi Indian ruin that lies just below and east of it. The cliff dwelling is in the back of a large alcove about 150 feet above the canyon floor.

This ruin is extremely unusual because it lies on the south wall of the canyon and faces almost directly north. No winter sun ever shines into this alcove, yet 700 years ago it was home to a large family of Anasazis. It is quite obvious that they chose this site specifically because of its proximity to the stone arch above it. The arch must have had powerful magic for these Indians, and I can imagine that living below it must have filled them with an immense sense of well being. The location was important enough for them to forego all of the conventional wisdom of the day by living on the coldest side of the canyon.

While you are looking at the ruin notice the long jagged line that was painted on the cliff just above the largest dwelling in the alcove. One can only guess what the line represented or what its purpose was, but to me it appears to be some kind of spiritual shield separating the Indian home from the arch above. As if the arch’s magic was so strong it was necessary to partially deflect it from the nearby house.

The next natural arch is located on the same side of the canyon, only 0.4 mile downstream from the first one. There are no Indian ruins near this arch and, though impressive, it is in near perpetual shade and difficult to photograph. It does have one feature, however, that makes it quite interesting. The 200-foot-high span stands directly in front of a 100-foot-deep alcove in the cliff, like the grand entrance to a giant ballroom. An small trail leads through the portal and circles around the ballroom, providing an opportunity to view the sandstone arch from a different perspective. There are also a few old cowboyglyphs carved into the walls of the room, one of which is dated 1917.

Beyond the last natural arch Escalante Canyon widens considerably as the trail winds over the last 1.8 miles to the trailhead at Highway 12. This part of the canyon is known as Phipps Death Hollow after a tragedy that occurred here in 1878. According to local folklore two cowboys named John Boynton and Washington Phipps were partners in a ranching operation along this stretch of the Escalante when Boynton shot and killed Phipps during an argument over a woman. So distraught was Boynton over what he had done that he saddled up and rode his horse to Escalante to give himself up. The authorities in Escalante gave him ten dollars and told him to report to the county sheriff in Parowan, but he must have had second thoughts along the way because he was never seen again.