As visitors make their way toward Bryce Canyon National Park, they are sure to spot many of the 59 mammal, 175 bird and 15 reptile/amphibian species living in the park and the surrounding area. Seeing animals in their natural environment is just as amazing as the sites in the park.

The most common mammals seen in and around Bryce Canyon are Uinta Chipmunks and Pronghorn Antelope. The chipmunks are plentiful within the park boundaries, especially near the picnic and overlook areas. This is due to visitors feeding these curious and friendly creatures. However, visitors need to stop this practice. Feeding these furry friends human food can lead to them becoming dependent on humans for survival; and may even lead to an early death due to health issues related to the unhealthy change in their diet.

Pronghorn Antelope are usually seen in the meadows along the roadway leading to Bryce Canyon. These magnificent creatures look like they should be running through Africa instead of Southern Utah. They most often travel in large herds and can be seen running and grazing throughout the Bryce Canyon area. They look similar to deer, but antelope have long slender horns and unique white and brown markings on their neck and chest. These animals are very skittish and will flee if anyone gets too close.

Many other mammals that can be seen at Bryce Canyon National Park include:

Reptiles, amphibians and fish are also found in the park. Some of the creepy crawlers and slimy swimmers found in the area include:

While there are many, many types of birds living in Bryce Canyon the two that are most commonly seen are Stellar Jays and Ravens. Stellar Jays look similar to cardinals, the main difference between the two birds is their coloring. Rather than brilliant red, the jays have black heads and beautiful sky blue feathers on their wings and chest. Ravens are large black birds resembling crows. They can be seen in abundance throughout the southwest and south central areas of Utah.

Some of the more uncommon birds that can be seen at Bryce Canyon National Park include: 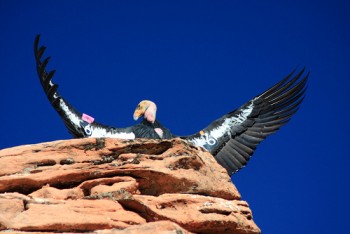 Every visitor to Bryce Canyon National Park is sure to have more than one encounter with the local wildlife that’s worthy of a PBS Nature Show. Here are a few safety tips to remember when having a close encounter in the park:

Always remember you are their guest and Bryce Canyon National Park is their home; treat the animals with the consideration and respect that they deserve. That way everyone involved will stay healthy, happy and have a wonderful experience.