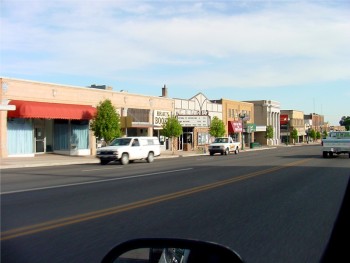 The settlement of Cedar City began on November 11, 1851, when a group of 35 men led by Henry Lunt and Peter M. Fife arrived in a blizzard from Parowan, 20 miles to the north, to establish an iron works. They founded what they called “Fort Cedar” or “Cedar City” on the north bank of Coal Creek. They decided upon the name because of the abundance of juniper trees in the area, which they thought were cedars. This site was equidistant from the iron deposits 10 miles west and the coal resources, 10 miles up Cedar Canyon to the east. They used wagon boxes as temporary shelters before they built small fort-style houses made from cottonwood logs as permanent housing.

In 1855, the group established a new site, out of the flood plain of Coal Creek and closer to the iron works, at the suggestion of Brigham Young, the president of the Church of Jesus Christ of Latter-day Saints, otherwise known as the Mormon Church or the LDS Church. The new site, the location of the downtown city park today, was nearer the proposed blast furnace. The iron works closed in 1858, but iron mining continued in the area until the 1980s. After the decline of the iron works, the town’s economy became more agrarian.

In 1897, the Utah Legislature authorized the establishment of a teacher training school in southern Utah, choosing Cedar City as its location. The community banded together to construct Ward Hall in downtown. However, two months after the school opened, the Utah Attorney General ruled that the building did not comply with a provision in the legislation requiring that the school have its own building on 15 acres of land deeded to the state and that if such a building was not established by September of the following year, the school would be lost. Cedar City residents, determined to have their school, banded together again to transport lumber from a mill near today’s Brian Head Ski Resort. In the dead of winter, townsmen waded through snow that was often as deep as their shoulders to transport the necessary lumber. A sorrel horse took the lead, walking steadily into the drifts and pushing them until they gave way to make a path. “Old Sorrel,” as the horse became known, was credited with saving the expedition. Through an incredible cooperative effort, Cedar City residents finished the building in time, securing the school.

First a branch of the State Normal School (now the University of Utah), the school became a Branch of the Agricultural College in Logan (now Utah State University) in 1913 and remained so until 1953, when it became the College of Southern Utah. Transformed into a four-year liberal arts school (Southern Utah State College) in 1969, it attained university status in 1991 and became Southern Utah University. It now boasts a student body of approximately 6,000 students.

In 1923, the Union Pacific Railroad built a spur off the main line from Lund to Cedar City. This development contributed mightily to the growth of the city’s economy, providing an outlet for mining and agricultural products and establishing the town as “The Gateway to the Parks.” Visitors arriving via rail boarded buses to tour what became known as “The Grand Circle,” which included Bryce Canyon National Park, Cedar Breaks National Monument, Grand Canyon National Park’s North Rim, Pipe Springs National Monument and Zion National Park. 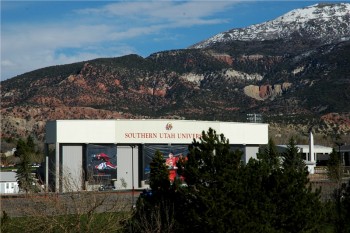 As with the founding of the school, Cedar City residents showed their community spirit through the construction of other buildings in the early 20th century. In 1922, the community donated the land and equipment to build the Old Hospital. In 1930, town residents constructed the Old Rock Church, located just east of the current city offices, from local materials and volunteered help. When a new hospital was built in 1964, the city donated the old one to the college for dorms and classrooms. It has since been acquired and renovated as the offices of the Leavitt Group.

Today Cedar City is one of the fasted growing communities in Utah and continues to be a center of commercial development and tourism. Southern Utah University is the city’s largest employer and the cultural heart of the community, hosting two of the city’s major annual events, the Utah Shakespearean Festival and the Utah Summer Games, as well as concerts, conferences, and university theater productions and athletic events.