There’s a short and sweet little mountain bike trail in St George called the Pioneer Trail,  which sits right behind Pioneer Park (or if you’re not from around St George, it’s where the big Dixie rock is painted). The trail itself is really easy to find and if you’re looking for a short but fulfilling ride then you’ve found the right place. If offers a little bit of downhill, but the majority of the ride you’ll be on that red slick rock following the rim of the red rocks. 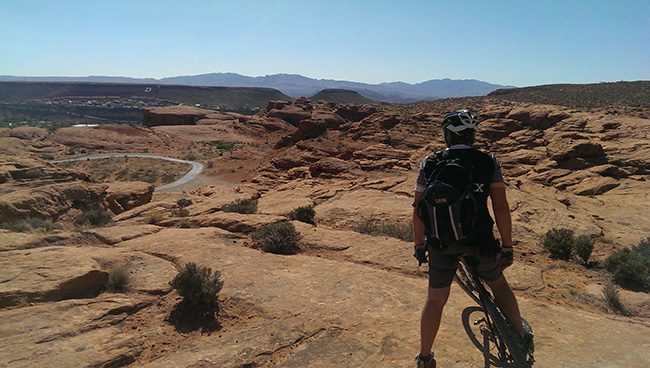 You can find the trail-head (there are multiple ways to start on it, this is the easiest way to get to it and the best route if you’re only planning on doing the loop) by passing by the Dixie rock on Red Mountain Parkway, go through the light as if you’re heading towards Snow Canyon and as soon as you crest the hill you’ll see a parking lot to your right.

Once you begin the trail you’ll head up the hill and then take a left at the top of the hill. You’ll be heading east for a few before you drop down and head south. If you’re anything like us you may pass right by the Pioneer Trail on your right because the downhills so fun, but look to you right because the trail goes along the rim of the red rocks. This is when the trail gets fun, in fact this picture was taken from there.

It’s fun to be in the hills behind Pioneer Park, a lot of people visit this park because of it’s relative ease of access. There are few who venture to the hills behind it either. So your trail will be largely void of very many people, but the views as you can see from this picture are great and worth the trip.

Depending on your skill level this trail is quite short and could be accomplished in as little at 30 minutes. Mountain biking in St George is so great, the trails they have to offer are endless and thrilling.