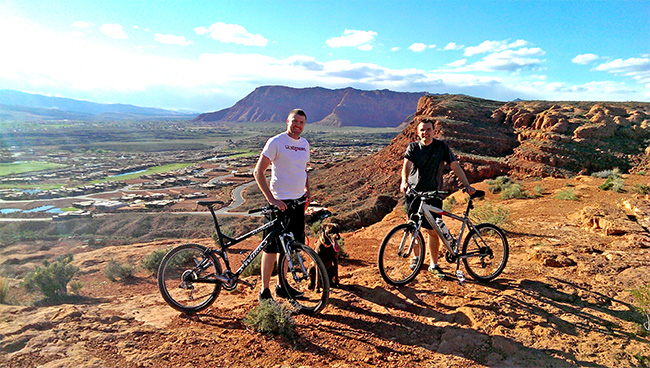 You start at the top of a random subdivision and quickly find yourself up on the bench or plateau overlooking Entrada Golf course, Santa Clara and Kayenta. With the Snow Canyon mountains in the distance.  You begin at the top of a subdivision on a trail called the Gap Trail.

Once you begin hang to your right and you’ll quickly encounter some thrilling drop offs and jumps. Your downhill takes a quick pause after a few minutes though, as you’ll begin your gradual ascent to the plateau. You’ll soon be riding on red rock as you near the top. It really isn’t a very difficult climb and offers tremendous beauty as you do.

Once at the top make certain to stop at the overlook seeing into Santa Clara and Entrada. That’s where this picture was taken when we rode this St George mountain bike trail a week ago.

After taking in the view and catching a breather you’ll head just little south to take on the downhill part of the trail. This part has some technical aspects to it that if you’re an inexperienced rider you may want to walk down some. If you’re experienced though, then some of the drop offs and jumps will make your heart happy.

You’ll be greeted with some intense downhill speeds as well as you roll over the red rocks of St George. In fact once you end up back at the beginning you’ll likely have just gotten warmed up and will be tempted to ride it again.

It’s a relatively short ride (only took us about 45 minutes), but there are different offshoot trails that are available to try as well up there.